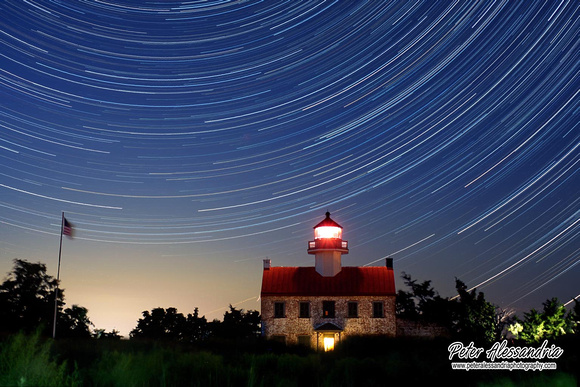 These photos were taken at the East Point Lighthouse in Southern New Jersey. The lighthouse was built in 1849 and is one of the oldest active lighthouses in NJ. It has a long history including being blacked out during WWII, partially destroyed by a fire in 1971, and renovated as recently as 2014. In addition to the sunset photos in this collection, there are star trail and Milky Way photos.

The Milky Way is our home galaxy and contains between 100-400 million stars. It is only visible certain times of the year and in certain places. The trick to capturing Milky Way photos is to find an area with very little light pollution, usually away from cities. Then you need a camera capable of high sensitivity and a good lens to capture the gas, dust, nebula and stars that make up the Milky Way Galaxy. I love how these photos convey the vastness of space and a sense of our place in the Universe.

Star trail photos track the rotation of the Earth as the apparent movement of the stars in the night sky. They are created by locking the camera down and taking a continuous series of images over several hours.The individual images are then merged into one to create the final photo. These particular photos combine more than 300 individual images taken over four (4) hours. For me, star trail photos create a sense of moving through time and space which I find so appealing.
(c) 2015 PeterAlessandria
User Agreement
Cancel
Continue