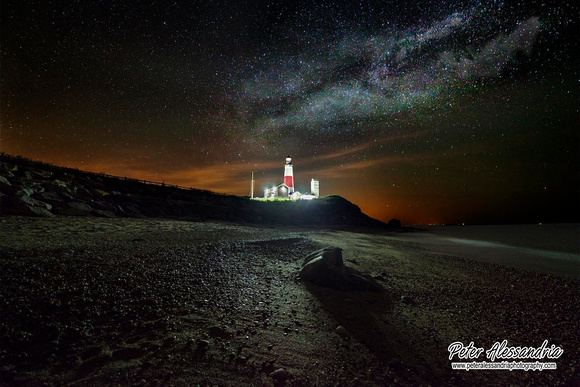 Memorial Day is the official start to summer. This year I beat the crowd and headed out to Montauk Point a week early. It is a three and a half hour drive from where I live in New Jersey. Even though I grew up on Long Island, I had never been to the Lighthouse. My goal was to arrive in time for sunset, wait a few hours after midnight to photograph the Milky Way Galaxy, and then stay awake for the sunrise the next morning. Two out of three isn't bad (I didn't make it sunrise - couldn't stay awake all night.)

The Milky Way is only visible in the Northern Hemisphere certain times of the year. Visibility is also highly dependent on weather conditions, as well as moonlight and light pollution from man-made sources. I had been wanting to shoot at the Montauk Lighthouse for a while now. Starting in March, I carefully watched the astronomical data to determine when the Milky Way would be at it's brightest. I knew the night of May 14th would be one of my best chances to capture this wondrous celestial body. But of course weather is also a factor. This time I got lucky: not only was the Milky Way highly visible astronomically-speaking, but it was almost a perfectly clear night weather-wise. Cold - 45 degrees - and windy, but clear as a bell. It was worth the 3 1/2 hour drive for sure!
(C) 2015 Peter Alessandria
User Agreement
Cancel
Continue