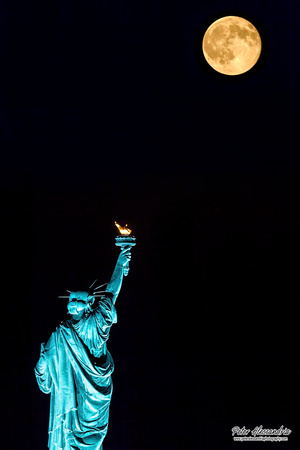 These photos were taken in July and August 2015. The July full moon was affectionately known as a "Blue Moon" since it was the second full moon of the month.

A couple of points worth noting: the moon isn't bluer on the night of the Blue Moon than any other night. In fact, depending on the atmosphere, it is more yellow-red than blue, at least until it rises above the horizon. Second, these photos were planned weeks in advance. I knew where the moon would be when so I could maximize my chances of getting these shots. I was in the right place at the right time because I did my homework and was well-prepared with everything I needed.

Anyway, I really love the way "Lady Liberty" interacts with the "Man on the Moon". While the moon wasn't blue, it sure was hot! Hope you enjoy these "Once in a blue moon" photos! :-)

PS - I took a little artistic license with the photos at the end with the multiple flags. These are composited - the moon you see in those photos was shot separately. It was there - just not that big. In all the other photos in this collection, the moon appears as it was shot that night.
(C) 2015 Peter Alessandria
User Agreement
Cancel
Continue