59 photos
THE STORY BEHIND THE PHOTOS

The George Washington Bridge connects New York and New Jersey and extends the I-95 corridor into New England. It was completed in 1931 at a cost of approx. $59 million. With a 3,500 ft center span, it held the title of the World's Longest Bridge until the Golden Gate opened in 1937 (both have since been surpassed by other bridges around the world.) The GWB is the world's busiest motor vehicle bridge with average vehicle crossings of 300,000+ per day and more than 106 million per year. It holds 14 lanes of traffic on two levels - the second level was added in 1962 - more than 30 years after the Bridge first opened - to accommodate the area's increased commercial and private traffic. Current tolls: $15 for passenger cars and $40-$150 for trucks/buses.
The Bridge'​s two towers were originally supposed to be covered but shortly before construction was finished a materials shortage forced the girders to remain exposed which has since become the Bridge's signature look. Ten times per year on National Holidays, the towers are illuminated from within to create an other-worldly glow. On those same days the George Washington Bridge is home to the world’s largest free-flying American flag, which hangs from the New Jersey tower above the roadway and is flown from 7:15 a.m. until 1:15 p.m (I have photos of this too).
In 2018, the Bridge will see the addition of a colored LED lighting scheme as part of NY Gov. Cuomo's plan to beautify NYC area bridges and tunnels.
© 2010-2023 Peter Alessandria 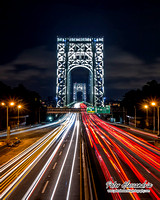 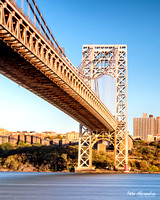 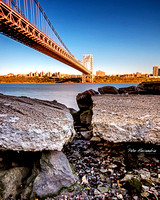 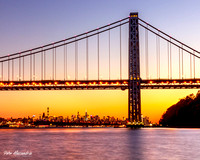 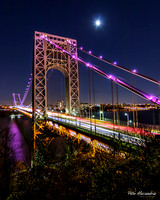 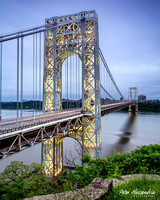 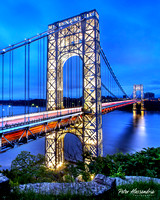 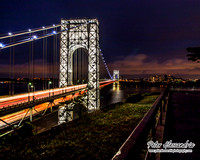 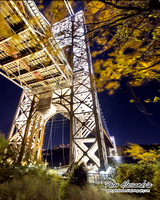