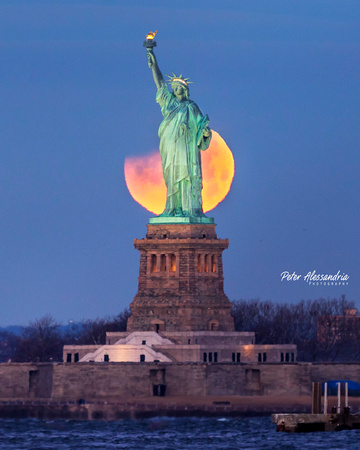 THE STORY BEHIND THE PHOTOS
The last day of January 2018 saw the trifecta of lunar events: Super Moon + Blue Moon + Lunar Eclipse. A Super Moon happens when the moon is closer than normal to the Earth. The Blue Moon signifies two full moons in one month. And a Lunar Eclipse is when the Earth casts a shadow across the face of the moon. In these photos you can see the eclipse just beginning - notice the "bite" taken out of the upper left corner. Unfortunately, for us here in the New York City area the sun came up and the moon set below the horizon before we got to see the entire eclipse. But sunrise corresponding with moonset made for some nice color in the moon and sky. This was also one of the coldest days ever for me shooting. These photos were taken from Brooklyn. The air temp that morning was 16 degrees, but with the wind chill with the whipping up through New York Harbor, it felt well below zero. It was so windy and cold it was almost impossible to work the camera! Somehow we survived, but it was almost two days before I got the feeling back in my fingers!
(C) 2018 Peter Alessandria
User Agreement
Cancel
Continue